Foot detox is a fad that is currently all the rage! Health spas and alternative health centers offer foot detoxes as a technique for removing heavy metals and other toxins from your body.

This is a relatively new treatment and you should look into it before indulging.

Also, be wary of getting a foot detox in an alternative medicine center.

You must ensure the center’s sanitation is of the highest level, otherwise you could pick up an infection that will require you to spend a lot of money on medication.

What is Foot Detox?

Foot detox, as mentioned previously, claims to eliminate toxins from the body through the soles of the feet. This is achieved by soaking your feet in an ionic footbath or by using a specially designed adhesive pad stuck to the sole of your foot just before bed.

Both these methods supposedly draw out all the toxins that accumulate in your body. The manufacturers of foot detox products say the products help to regulate:

The charge in the ions allows them to bind to the heavy metals, pulling the toxins out through the soles of your feet. The footbath water turns different colors, allegedly suggesting different metals have left the body. 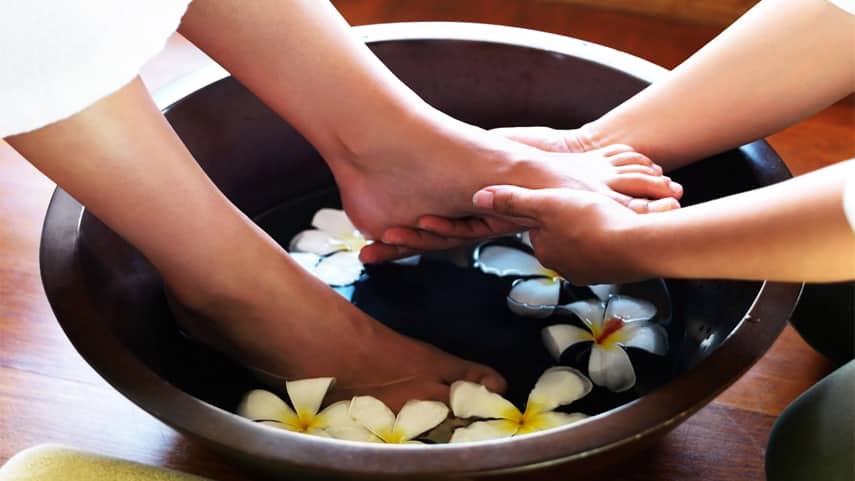 Ionic therapy has loose links to Royal Raymond Rife’s work. He was an American inventor who devised a bioelectric medicine.

His theory was that all viruses are prone to destruction if introduced to the right amount of resonating frequency, akin to glass shattering because of a high-pitched sound.

In the 21st century, Dr. Mary Staggs used this theory and various others to create the first-ever ionic footbath in 2001 for commercial purposes.

Research on foot detox is minimal, but there is evidence that it might not be as effective as claimed. A study carried out in 2012, published in the Journal of Environmental and Public Health, took a close look at the ion cleanse footbath.

The study found that the foot detox did not do anything to reduce the level of toxins in the body. Neither did the foot spa do much in stimulating the body to remove toxins.

However, some people believe foot detox does work. Other research claims that ionic footbaths do detoxify and remove heavy metals.

The certainty of the machine is yet to be proven and any evidence that it works is mostly anecdotal. Traditionally, acupuncture and many forms of herbal medicine have been seen as significant elements of Chinese medicine.

The present-day ionic foot detoxes are modern inventions, but magnetism has been used in Chinese medicine for more than 2,000 years. According to the Pacific College of Oriental Medicine, ionic footbaths do work.

Ionic detox has been known to:

Conclusion: A Word From the WellnessCouncil

Ionic footbaths are believed to remove toxins from the body via the soles of the feet. Some studies have tried to prove the truth in these claims, but there is little evidence to back it up.

Some insist it is a scam. But most, especially alternative medical centers, push the narrative positively and go out of their way to prove their claims.

The Pacific College of Oriental Medicine is one such college that has carried out research into determining the authenticity of ionic footbaths.

While it is unclear where the truth lies, don’t shy away from having a footbath. Whether the ionic footbath draws toxins from your body or not, it has myriad benefits and the relaxing and soothing feeling cannot be overemphasized.